Episode 7
Minami (美波) is a character from Kono Oto Tomare. She is the person who bullied Hiro Kurusu into losing all of her friends and boyfriend.

Minami is a girl of average height with short brown hair with bangs. In middle school, she wore the school uniform: a light brown blazer, a white button-up dress shirt with a black string tie and a black skirt.

When Minami attended Meiryou High School, she wore the school uniform: a light gray sweater vest, a white button up dress shirt with a black bow tie, and a black skirt.

Minami comes off as a nice girl on the outside. However, that is only a facade hiding her true nature. Minami is very capable of ruining people’s lives and gets away with many things. Minami can’t admit to her own wrongdoings and is very unapologetic. Minami doesn’t shy away from lying.

Minami transferred to Hiro Kurusu’s junior high school in the 2nd year. Minami was nice to everyone and there was even a time when Minami and Kurusu were friends.

However, things began to change. Minami took a liking to Hiro’s boyfriend, Naoya. Minami started spreading lies about Kurusu, saying that Kurusu had been harassing her because she thought that Minami was going to steal Naoya. Minami made Kurusu lose every single one of her friends. Naoya also left Hiro because he was convinced that Hiro had been complaining about him to her friends. Naoya broke up with Hiro and started dating Minami instead. After Minami got what she wanted, Minami left Kurusu with no friends all alone.

In the 2nd year of high school, Minami and Naoya were out shopping for things together. Minami was talking to Naoya with a treat in her hand when she spotted Kurusu and Takezo Kurata. Minami walked over to Kurusu and said that it was a coincidence that they saw each other again. Minami was acting all nice until Naoya brought up middle school. Hiro was absolutely crushed to see that Minami was with Naoya now because it brought back bad memories of the past. Naoya was still claiming that Kurusu was a horrible person as Kurusu tearfully told him that she was never mean to Minami. Before the argument could get even more heated, Kurata stepped in and took Kurusu away. Naoya thought that Kurata was Hiro’s boyfriend and told Kurata to not talk to Kurusu anymore. Kurata turned around and said that he was a much better judge of character than Naoya and they left.

While Minami stood there and watched as Kurusu and Kurata walked off, she was scared that she had been caught and that her secret was out and she didn’t know what to say to Naoya as it was very awkward. After that, it is unknown on what happened to Minami as she has not been seen again, but it could be possible that Naoya dumped her after her secret was exposed. 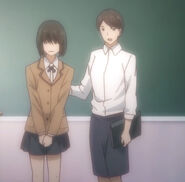 Teacher introducing Minami to the class 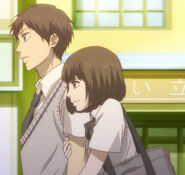 Minami with Naoya when they meet Hiro Kurusu again 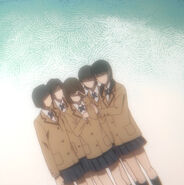 Minami, Naoya and all the other friends walking away from Kurusu, ignoring her

Minami realizing that her secret was out

Minami talking to Naoya on the streets 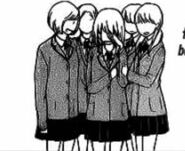 Minami being defended in the manga